THE SUICIDE (dark comedy) An independent film written and directed by Jeff Markey based on a short story written by Charles Bukowski. Jeff plays Officer Notolli – an arrogant LAPD officer who saves the day… or does he? Marvin Denning is ready to end it all and “swan dive” off the 6th street bridge in downtown Los Angeles, until Officer Notolli and his partner, played by Chase Kim, intervene. They take off thinking it’s the last they’ll see of Marvin, but are forced to return after an altercation in the diner turns Marvin from a suicidal loser into a courageous hero.

There is Special Screening of “The Suicide” in the Charles Bukowski section of 2015 San Pedro International Film Festival on Sunday October 11th at 4pm. Charles Bukowski: the laughing heart – A 95th Birthday Celebration is a tribute to the legendary writer Charles Bukowski. A prolific author of thousands of poems, hundreds of stories and six novels, Bukowski eventually published over forty-five books and various collections of his work chronicling his own personal experiences reflecting the gritty glamor of Los Angeles and society in general. 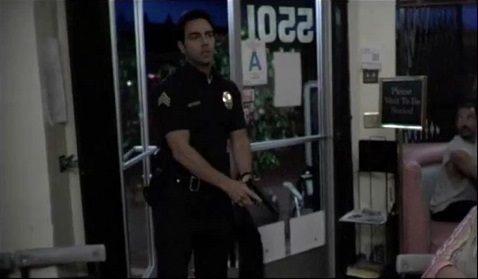