Jeff was a guest on the Davi Davenport Live show this week which features Weho personalities, celebs and more! Davi is an amazing talk show host who is always in the moment and a load of fun. The show is filmed in a studio at the new West Hollywood Library and Park, and airs live weekly on local Los Angeles network Time Warner 36 Thursdays between 8:30-9:00pm. You can also catch on Ustream and Davi’s Youtube Channel.

Live TV anything can happen – and it sure did! Jeff discussed his upcoming projects The White Orchid and Uncertain Terms and shared some great Hollywood stories and how he started in NYC. Davi and Jeff discussed current events like the Oscars and how Jeff was all about #TeamBirdman this year. Jeff’s birthday was this week so they also had a birthday surprise for him with some great food and laughs. What a blast! 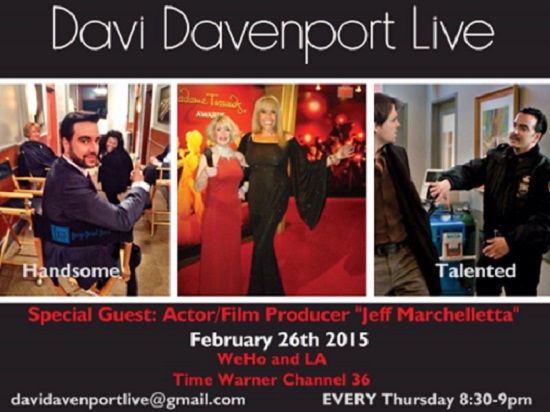