Slamdance Presents Mark Jackson’s Independent Spirit Award Winning film “Without” as part of its Cinema Club Screening Series through Arclight Cinemas nationwide. “Without” won critical praise and awards from festivals around the world, and made Best of the Year film lists from Indiewire, Film Threat, Movie City News and Screen Anarchy, among others. It was nominated for a Gotham Award and won an Independent Spirit Award – the highest honor for an indie film outside the Oscars. Jeff was part of an important and meaningful Q&A panel discussion along with the other filmmakers, star Joslyn Jensen and representatives from the It Gets Better Project at Arclight Cinemas Hollywood 8/14/2017. Inspired by the tragic true-life stories of cyber-bullying and suicide in the LGBTQ community, Without is an intimate portrait of a young woman in crisis.

More screenings are taking place at Arclight Cinemas Chicago on August 23 & 24 at 8pm. Here’s a link for more info and tickets: Slamdance Presents

Synopsis: On a remote wooded island, a young woman becomes caretaker to an old man in a vegetative state. She has no cell service, no internet. A the monotony of her daily routine starts to unravel, boundaries collapse and she struggles with sexuality, guilt and loss. 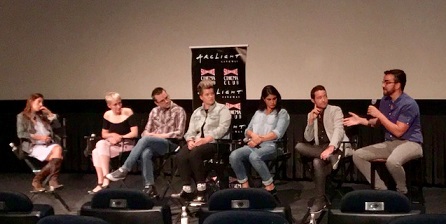